18 reasons why Kenya should be your next holiday destination

Kenya is easily one of Africa’s greatest wildlife watching destinations, home as it is to the Big Five (African lion, African elephant, Cape buffalo, African leopard, and white/black rhinos). 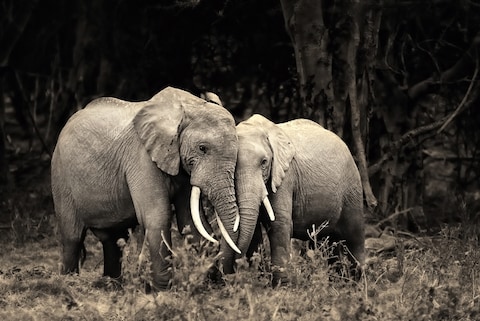 2. Or witness the greatest migration on Earth

From mid-August to October, more than a million wildebeest migrate from the Serengeti in neighbouring Tanzania to Kenya’s Maasai Mara, accompanied by hundreds of thousands of Thomson’s gazelle, zebra and eland. Despite the plethora of videos and photography of the migration available online, nothing comes close to seeing in person the mass movement of animals, lumbering, strutting and swaying in one of the great wonders of the natural world. 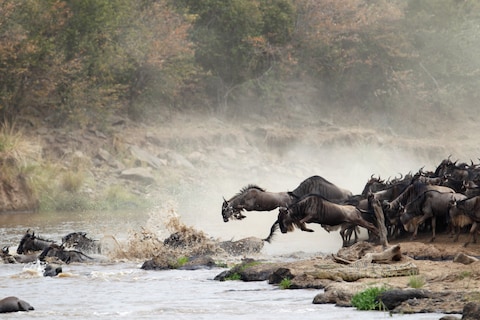 The wildebeest migration is one of the world’s greatest natural spectacles CREDIT: GETTY

3. Entry is simpler than ever

Kenyan authorities introduced an e-visa system in 2015, meaning British travellers no longer need apply for entry documents before travelling, or queue at the airport for all the right stamps. A single entry visa costs $51 per person (£39) and the e-visa site is linked from the Foreign Office’s Kenya travel advice page. Ensure that you use the official e-visa website to avoid being scammed by fake providers.

NZ travellers still need a visa before they can enter Kenya.

Brian Jackman, Telegraph Travel’s safari expert, recommends Kenya as one of the best countries in Africa for those on their first wildlife watching expedition. “If you catch an overnight flight from Heathrow you can transfer to a light aircraft next morning and be in the bush in time for brunch,”  he said. “Such things are possible in Nairobi because Kenya’s safari industry is backed up by an efficient tourist infrastructure with a dazzling choice of camps and lodges to suit all budgets. This is, after all, where modern safaris were invented back in the Twenties.”

The Maasai Mara is one of the best places in Africa to encounter big cats. “Cheetahs and lions roam the plains, waiting for the migrating wildebeest, and leopards pose in its riverside fig trees,” wrote Jackman in his guide to the 10 best luxury safaris in Africa. “In fact, the animals are so associated with this region that the BBC chose the Mara for their Big Cat Diary TV series.” 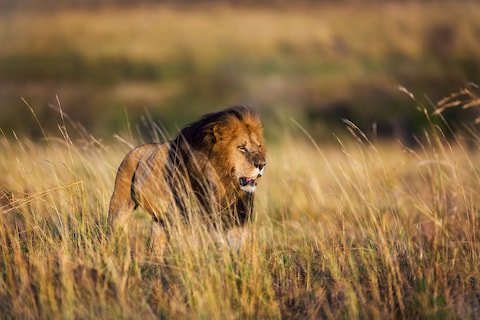 Kenya is renowned for its populations of big cats CREDIT: AP/FOTOLIA

6. After a safari, flop on the beach

Kenya’s geography means that it offers the perfect combination of fauna-and-flora spotting adventures in its dozens of mighty national parks, and opportunities for lying prostrate on white sand Indian Ocean beaches. Africa Travel recommends an 10-day safari-and-beach itinerary, with the first stop at Kicheche Laikipia Camp, home to the country’s highest population of black rhino, as well as elephant, cheetah, lion, and leopard. Guests then move onto a beach hotel for a couple of days of watersports and relaxation. 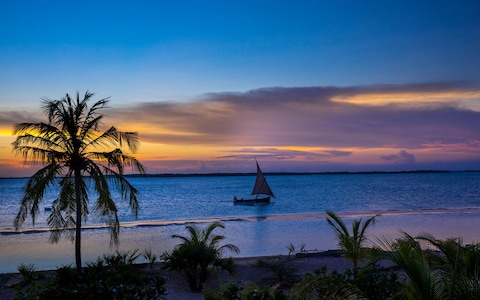 7. The bird life will have you all a flutter

Kenya has more than 1,000 recorded bird species, including flamboyant crowds of pink flamingos whose massing makes for surreal photographs. They have been driven from Lake Nakuru in the past half decade because of industrialisation and rising water levels. Many have moved to Lake Bogoria, which covers 32 square kilometres (12 sq miles). The matchstick-legged birds can be seen feeding on the algae that gives them their candyfloss hue amid geysers that result from the lake’s geothermal activity. Also visit Lake Naivasha, home to Golden-winged Sunbirds, Superb Starlings and African Fish Eagles – Naturetrek runs small group wildlife-watching tours. 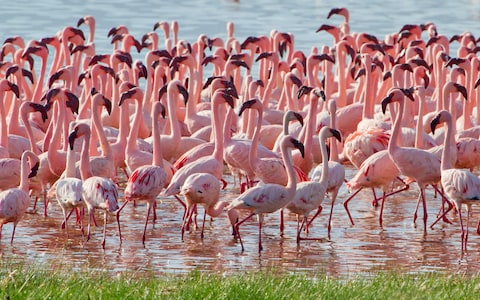 8. You can sleep under the stars

Loisaba Lodge is set in a 61,000 acre reserve, and guests can experience the wilderness by night in private huts open to the skies a 20-minute drive from the main building. Beds, which can be wheeled out into the open or taken inside if the weather turns, overlook either a watering hole or a river where there is every chance of catching sight or sound of passing game.

It sits in Laikipia, the most heavenly corner of the country. “This is the Africa of dreams: the air fragrant with the smell of greenery, alive with the sound of creatures, and, at night, lit up by what seems like a trillion stars,” says Lisa Grainger.

Less well-known than its Tanzanian sister, Mount Kilimanjaro, and considered a more challenging climb among mountaineers, Mount Kenya sits in its own national park, amid endemic fauna and flora. The highest of three peaks rises to 5,199m, although this requires a technical climb. Even the lowest of its three summits, though, offers astounding panoramas over the plains and savannah below, and as you ascend through the foothills you may spot elephant, black ehino, Cape buffalo, Colobus monkey, antelope and giant forest hog. 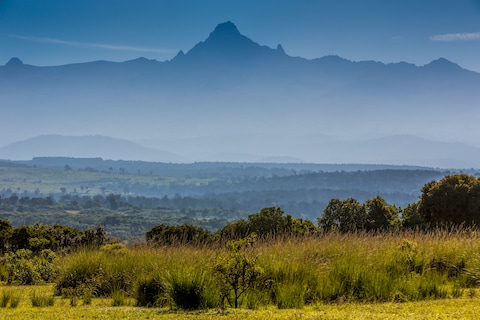 10. It has ancient sites that will interest everyone

Even for those who sigh at the prospect of poking around old ruins, the former town of Gedi near Kenya’s coast will not fail to captivate. With origins in the 12th century, this Swahili town reached its zenith in the 15th century, and its wealth is indicated by the clusters of mosques, a magnificent palace and houses, all in 45 acres of primeval forest. It was first visited as an archaeological site by Sir John Kirk, a British resident of Zanzibar in 1884, and is today maintained by the National Museums of Kenya. 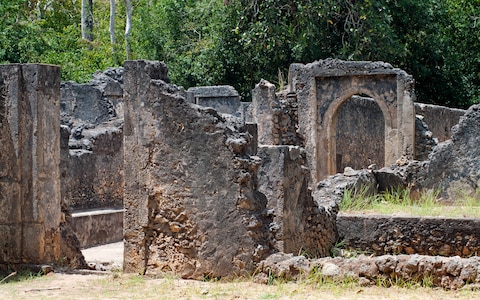 11. It’s home to one of the Queen’s favourite hotels

Founded in 1932, Treetops is Kenya’s oldest safari lodge, and Princess Elizabeth was in residence here when she was told of the death of her father, King George VI, prompting her ascendency to the throne. “For the first time in the history of the world,” wrote big-game hunter Jim Corbett in the Treetops logbook, “a young girl climbed into the tree as a princess and climbed down as a queen.”

12. Wills proposed to Kate in Kenya

Kate Middleton and Prince William stayed at Lewa Wildlife Conservancy in the foothills of Mount Kenya in October 2010, and came home engaged after the heir to the throne proposed at the luxury lodge. Unesco-listed Lewa, which has 55,000 acres of savannah, is home to the Grevy’s zebra, and more than 70 black rhinos, as well as elephants, lions and cheetah.

Indeed, sensible tourism can be an alternative to poaching and discourage people from engaging in it. Telegraph Travel’s Lisa Grainger writes: “If tourism dies in Kenya, then there is no one to support the people who make their living from it, and the rangers who protect the wildlife. So communities have to turn to wildlife for food – and are forced to go into the cities to look for work. Tourism here really does protect traditional ways of life, and cultures, and wilderness.” 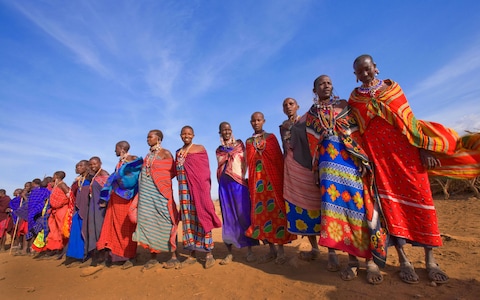 Kenya is home to many talented craftspeople who make covetable objects. Look out for Kitengela glass, which is made in the middle of the bush, and products from Ocean Sole, which pays local people to pick up old shoes washed up on the beach and turn them into toys. Also look out for beaded belts and shoes, which are sold across the country.

15. You can eat breakfast accompanied by giraffes

The famous Giraffe Manor is set in 12 acres of private land in a Nairobi suburb and allows guests to participate in sunset feeding sessions. Expect other impromptu feeding sessions: the herd of Rothschild giraffes will often poke their heads through the windos of the manor house for extra treats. 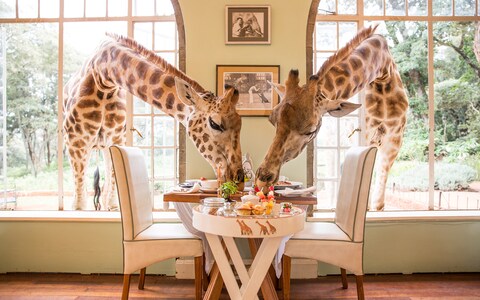 The local giraffes are certainly not shy

16. Or witness the Great Rift Valley

Maasai herders, herds of elephant, wide plains and dramatic escarpments all define the Great Rift Valley, which reaches through Kenya as part of a 6,000-km long scar that stretches from Jordan in the Middle East across Africa to Mozambique. 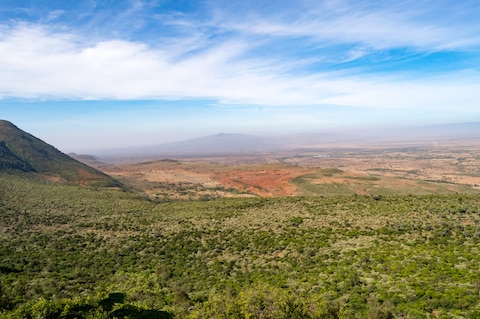 The epic Rift Valley stretches all the way to Jordan CREDIT: GETTY

Named after a narrow crack in the cliffs, once a tributary of a prehistoric lake, this national park north-west of Nairobi is home to Fischer’s Tower and Central Tower columns. Visitors can walk among buffalo, zebra, eland and Thomson’s gazelle and see baboons scratching each other. Prepare to be rendered silent by the beauty of the Njorowa gorge’s red sandstone walls.

More adventurous travellers will look to the capital, which has a reputation for high crime levels and few reasons to stick around. However, centres such as GoDown Arts Centre, Shifteye Gallery, and The Kuono Trust offer visitors and locals the chance to see Kenyan creative at work, showing another side to Nairobi. Live music fans should check out jazz, hip hop and dub performances too.

Thinking of going to Kenya, or another destination in Africa? Get in touch and we can help plan your trip.

The best cruises for photography